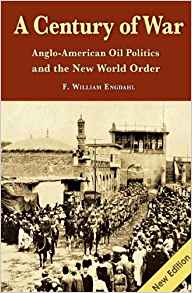 This classic book is back in stock and more important than ever. “Control the oil and you control entire nations,” said Henry Kissinger. Oil is an instrument of world domination in the grip of the Anglo-American empire. This book is a gripping account of the murky world of the Anglo-American oil industry and its hidden role in world politics. F. William Engdahl takes the reader through the history of how seven giant oil companies—five American and two British—developed a controlling grip on the world’s economy unprecedented in history. This is no ordinary history of oil. It is a history of global geopolitics—how control of strategic geographical pivot regions helps control in large part the world economy. The book sheds light for the first time on such events as the 1973 oil shock—a sudden 400% rise in the price of the world’s most essential commodity in a matter of weeks. What Engdahl reveals, with flawless documentation, will shock most uninformed people. The implications are even more devastating. He also documents how oil played an essential role in the ultimate collapse of the Soviet Union, in the rise and fall of the Taliban in Afghanistan, in the U.S. occupation of Iraq, and countless other events not normally understood in such a light. Softcover, 352 pages.