114: UNCUT and UNCENSORED—The 114 Most Important Suppressed Stories That Didn’t Make It On Your Nightly News

View cart “HILLARY (AND BILL) TRILOGY Book Deal” has been added to your cart.
Sale! 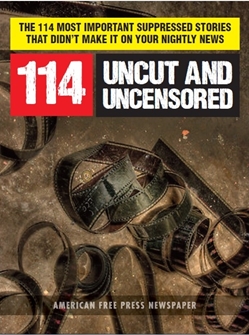 69 in stock (can be backordered)

Do you believe what you see on your nightly newscasts or in the pages of your favorite mainstream newspaper? If you do, you’re making a mistake. Did you know that just six manor conglomerates own 90% of the news outlets in America today? And that they are in the “news” business not to give you the unvarnished truth, but to make huge profits for their CEO and board of directors?

For instance, for many years CBS was wholly owned by Westinghouse and NBC by General Electric. Both of them still have huge stakes in the armaments industry, making smart bombs and missiles and drones and hi-tech guidance systems. So, if one of those smart bombs, for instance, went off course and killed an innocent family or slammed into a hospital, do you believe that either of those news outlets would have reported that to the public? Of course not. It happened, and they didn’t. It was not in their best corporate interests to tell the truth about that subject.

And, for many years, the Disney Corporation was the owner of ABC. Thus, not once did ABC report on the serious problem of child molesters prowling the Disney theme parks. It happened, and they didn’t. But again, that’s not surprising, because reporting the truth about that topic was not in Disney’s best business interests.

And so it goes with all mainstream news outlets. Not only will they not report on the malfeasance of their owners, they are not going to report on the crimes of their biggest advertisers and financial donors.

And that’s why AMERICAN FREE PRESS is different, as you will see in this amazing collection of news stories compiled from just one year—2014. AFP is not beholden to the whims of outside advertisers, it does not have a board of directors that receives money for its participation in the success of the newspaper and does not respond to pressure from outside lobbying groups. Just the opposite.

AFP is owned by its employees, who have a united dedication to presenting the truth, not lining their pockets. And so it has been since 2001, when AFP was founded.

Inside the book you are holding right now, we have presented 114 of the best uncut and uncensored news stories we published in 2014. It’s loaded with coverage of important news stories that, for one reason or another, mainstream media outlets have refused to discuss or, for their own financial greed, have reported the side of the story they think will best help to grease their way to financial success.