View cart “A CONFLICT of INTEREST” has been added to your cart. 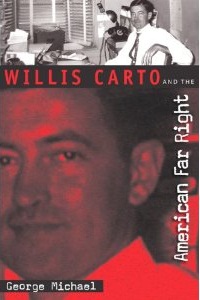 15. The Rise and Decline of the Christian Patriot/Militia Movement — 177

18. Death and Rebirth? The End of the Spotlight and the Emergence of American Free Press — 218

Despite certain fallacious assumptions, particularly regarding the veracity of the official “Holocaust” narrative of WWII and the purported diabolical nature of Adolf Hitler and National Socialist Germany, George Michael’s detailed biography of Willis Carto’s life, political activities, and publishing endeavors is commendably balanced and written in an extremely scholarly fashion, with literally hundreds of end notes coupled with an extensive bibliography. The details and facts provided throughout the book are painstakingly documented, providing a thorough and all-encompassing overview of one of America’s greatest patriots along with a general history of the American far right.

Michael, a political science professor who has studied and written extensively about the political right, was granted exclusive access to Willis Carto in preparation for his must-read book, Willis Carto and the American Far Right, conducting numerous personal interviews which allowed him to obtain a deeper insight into Carto’s views and activities since he became active in the right wing struggle shortly after WWII. Describing Carto as “undoubtedly the central figure in the post-World War II American far right,” Michael outlines Carto’s efforts to promote the various causes associated with the right wing in America.

Carto has been instrumental in publishing and promoting a wide variety of marginalized, demonized ideas and political perspectives over the course of his long publishing career. The Spotlight, perhaps Carto’s most influential and well-known publication that was later reorganized as American Free Press, championed traditional right wing and conservative causes including nationalism, populism, patriotism, and racialism. Carto’s publications have also been and remain uncompromising opponents of multiculturalism, unnecessary wars and foreign interventions, and the push for internationalism, free trade, and open borders, among other important issues. The views and opinions found in Carto’s former and current publications epitomize American political and economic traditions formulated and implemented by the Founding Fathers.

Perhaps his most controversial endeavor (yet arguably the most important), Carto also sought to institutionalize historical revisionism, which is simply an attempt to bring history into accord with the facts as we know them, especially as it relates to WWII and the alleged Jewish “Holocaust.” This vital and courageous undertaking lives on with The Barnes Review, the sister publication of American Free Press. Additionally, Carto attempted to institutionalize a populist, America-first political lobby and political party, founding the Liberty Lobby and the Populist Party respectively.

As the founder of the Liberty Lobby, which Michael characterizes as “one of the most enduring institutions in the history of the movement” that “provided a base where virtually all segments of the far right came together,” Carto sought to institutionalize and unify the various, and often diverging, actors and organizations comprising the right wing in an effort to gain credibility amongst the American populace as well as advance the interests of the right wing more effectively.

Given the nature of the Liberty Lobby’s political persuasion, along with its hard-hitting, resolute, and popular publication, The Spotlight, it of course attracted powerful and ruthless enemies who were determined to undermine and destroy it, which was eventually accomplished.

Michael details the origins and platform of The Spotlight newspaper, which was “an important bridge between various segments of the far right,” a role now fulfilled quite effectively and successfully by American Free Press. Indeed, American Free Press and The Spotlight before it are arguably “the organ of the American far right” as Michael notes, which appeal to many segments of the right wing in addition to other populists, environmentalists, and critical thinkers, including opponents of globalism, massive immigration, and the Israel lobby as well as traditional America-first conservatives and racialist thinkers. Early in his career, Carto eloquently argued that “each cultural unit has a moral imperative to be true to itself and pursue its own destiny,” a theme that is righteously emphasized in his both his current and past publications.

Willis Carto is a man who has done more to advance the agenda and causes of the right wing in post-WWII America than any other single individual. Over the years, he has published a variety of newsletters, newspapers, and journals, covering some of the most important and controversial issues facing not only America, but the entire world. Carto has never backed down from or avoided the uncomfortable realities that so many in the media and political establishment cowardly acquiesce to or traitorously facilitate.

Confronting the organized Jewish community, the Israel lobby, race hustlers, cultural Marxism, the war on White America, and false narratives of history— particularly as they related to WWII—Carto has been, and remains, in the vanguard of authentic American nationalism, populism, and truth-telling. He has been persecuted, stabbed in the back, and slandered—yet he has persevered and today he stands as the most iconic and influential figure in the American right wing.

Michael’s book is simply a must read for anyone truly interested in the history of the American far right and the courageous, heroic efforts of one of its key players in the post-WWII era—Willis Carto.

To obtain a thorough understanding of Carto’s worldview and opinions on a variety of controversial and complex geopolitical and historical matters, pick up a copy of An Appeal to Reason: A Compendium of the Writings of Willis A. Carto. Discover what Carto really thinks about these important subjects, straight from the horse’s mouth.

Who was Willis Carto?

Meet the man who’s been called frightening, controversial and mysterious and who’s been a driving force behind such independent media voices as The Spotlight, The Barnes Review and American Free Press, among many others.

For over 50 years he’s been one of the front-line figures in the American nationalist movement and the target of groups like the Anti-Defamation League (ADL).

Here’s the first-ever full-length biography of Willis A. Carto.

Maybe you’ve heard of him, maybe you haven’t. But Carto’s central role (usually behind the scenes) in so many important projects of interest to American patriots, is the focus of this wide-ranging and intriguing work. Love him or hate him, here’s his story.

Considering the volume of lies and disinformation that’s been circulated about Carto over the years, this work by George Michael, Ph.D., a professor at the University of Virginia’s College at Wise, is a reasonably objective study by a scholar who’s taken the time to interview Carto and his associates, delve through the archives and try to separate the facts from the myths.