View cart “The DEA REPORT: Did Israel Have Foreknowledge of the Sept. 11 Terrorist Attacks?” has been added to your cart. 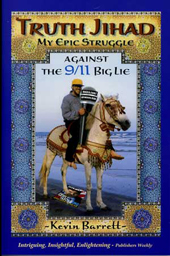 Millions of people now know the main arguments for the thesis 9/11 was an inside job, starting from the controlled demolition of the World Trade Center buildings No. 1, 2 and 7. Even a champion of orthodoxy like Time magazine was obliged to note that the 9/11 Truth Movement is no longer a fringe phenomenon. It is a mainstream reality.

Kevin Barrett takes this now-familiar thesis as a springboard to new territory in this book. Like Jack Kerouac in On the Road, Barrett has written a gospel for a new generation of post-9/11 sceptics.

This ebullient book strikes a confident keynote for this sudden coming of age. It is for millions of disenfranchised 9/11 truthers—and for the uneasy majority who sense that America is no longer on the right track. Truth Jihad is the first 9/11 Truth book that is not primarily tasked with proving 9/11 was an inside job to our fellow humanity.

Kevin Barrett, Ph.D., is an Arabist-Islamologist scholar and one of America’s best-known critics of the War on Terror. From 1991 through 2006 Dr. Barrett taught at colleges and universities in San Francisco, Paris and Wisconsin. In summer 2006 Dr. Barrett was attacked by a group of Republican state legislators who called for him to be fired from his job at the University of Wisconsin-Madison due to his political opinions. Since 2007 Dr. Barrett has been informally blacklisted from teaching in American colleges and universities.

Dr. Barrett ran for Congress in Wisconsin in 2008, and currently works as a nonprofit organizer, public speaker, author, and talk radio host. He is the host of “Truth Jihad Radio,” a hard-driving weekly radio show with guests from around the world, online here. He lives in rural western Wisconsin with his wife, two sons, and a dog named after Salman Rushdie. His website is www.truthjihad.com.