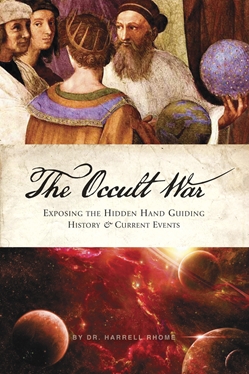 There is a secret war—an Occult War—being waged in the world today. The perpetrators of this immoral attack on the people of the world are hiding behind the scenes, manipulating the news media, financial institutions and governments across the globe to attain their nefarious secret society goals. This war has been going on for countless generations and the ultimate aim is the final formation and implementation of what we call today the New World Order.

In his last published work before his death, historian and philosopher Dr. Harrell Rhome, Ph.D. explores this important issue through the words and ideas of some of the great philosophers and nationalist thinkers who have examined the issue. This includes Italian philosopher Julius Evola, one of the leading intellectuals, leaders, philosophers and inspirations for what is today being called “neo-nationalism.”

Now you can travel along with Dr. Rhome and these other writers and thinkers as they expose the secret symbolism, the police state intelligence networks, the Illuminati mind control propaganda efforts, the mysterious relationship between Judaism and Freemasonry, the secret societies, the occult origins of the American nation, the Occult War plots and the ultimate plan to enslave us all—and how we can stop the New World Order in its tracks.

“You Must Be Mad or You Wouldn’t Be Here”

Understanding the Occult and Occultism

The Realities of the Occult War

The Occult War and the Modern History of Germany

The Relationship Between Judaism & Freemasonry Exposed

The Occult Origins of the American Nation

Freemasonry and the Seat of Power

The Occult War Through Magical Works and Symbolism

Struck Down by Forces Occultes—The Life, Times and “Crimes” of Bernard Fay

The Occult War and the Ending Cycle

Creating an Effective Strategy to Battle the Occult Warriors

“Rise up; This Matter Is in Your Hands.”