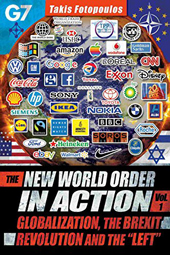 The New World Order in Action, Vol. 1: Globalization, the Brexit Revolution and the Left (Post Election)

This is the first of a three-volume major project which aims to cover all aspects of the New World Order (NWO) of neoliberal globalization, with its effort at full integration of every country in the world into this new order. The phasing out of economic and national sovereignty implied by this process has led to a global popular movement for sovereignty, i.e. self-determination and against globalization.

The rise of the NWO and the role of the Transnational Elite, that is, the network of the economic and political elites which administers it, are examined in the first volume. Furthermore, the mythology used by the elites as well as by the globalist “Left” is examined.

It was the full integration of the Left into the new order, which has led to its political bankruptcy and the rise of a neo-nationalist movement, embraced by most of the victims of globalization and particularly the working class that used to support the Left. The need for a struggle for national as well as social liberation has become imperative today.

In the following volumes it will be shown how the use of economic and military violence in the Middle East and Europe was successfully used for the full integration into the NWO of Iraq, Libya, Syria, as well as Ukraine and Greece.

Takis Fotopoulos is a political philosopher and economist who founded the inclusive democracy movement. He is noted for his synthesis of the classical democracy with the libertarian socialism and the radical currents in the new social movements. He is the editor of The International Journal of Inclusive Democracy (which succeeded Democracy & Nature). He was previously (1969-1989) Senior Lecturer in Economics at the University of North London. In his seminal work, Towards An Inclusive Democracy (London & New York: Cassell, 1997), which has been translated into French, German, Spanish, Italian, Greek, and Chinese, the foundations of the inclusive democracy project were set. He is also the author of over 2,000 articles in British, American, and Greek books, journals, magazines, and newspapers, several of which have been translated into over 20 languages.

Preface to the second edition 11

Chapter 5. The myth of the multipolar world and the BRICS 115
Are the BRICS countries sovereign? 115
The myth of the Chinese superpower 117
The BRICS cannot be an alternative pole to the NWO 123
Towards the end of the BRICS “miracle”? 127

Chapter 6. The rise of the globalist ‘Left’ in the NWO and its myths 131
Is the traditional Left-Right division meaningful today? 131
Antisystemic vs. reformist Left and the globalist ‘Left’ 132
From the antisystemic movement against globalization to the World Social Forum 136
The outdated (globalist) antisystemic Left 140
The deceitful (globalist) reformist Left: SYRIZA and Podemos 147
The reasons why neoliberal EU cannot change “from within” 156
The Left’s myths about Internet democracy and freedom of speech in the globalization era 162

Chapter 7. The pro-EU propaganda about “democratizing” Europe and the NWO 173
DIEM25: A Manifesto for Perpetuating the EU Elites’
Domination 173
The pseudo-democratic ‘credentials’ of DIEM25 176
The aims of “authentic democracy” and the strategy of
DIEM25 179
The timing of the manifesto and the rise of the neo-nationalist movement 185
The Globalist ‘Left’ and the ‘Manifesto’ 186

Chapter 8. Brexit Revolution and Counter-revolution 193
Introduction 193
The historical background of Brexit 194
a. The origin of the EU as the economic complement to NATO 195
b. The EU evolution from an economic union of nation-states to a branch of the NWO of neoliberal globalization 198
c. The NWO of neoliberal globalization and the social-democratic dreams to improve it 201
d. The NWO and the globalist ‘Left’ 206
What was really at stake with Brexit was national sovereignty and the lives of the victims of globalization 208
Brexit as a precondition for sovereignty 213
The elites’ Project Fear on Brexit 219
The disorienting stand of the globalist ‘Left’ on Brexit 226
Why was the Brexit vote a revolution? 231
Brexit as a class issue 239
The smearing of the Brexit revolution as a prelude to the counter-revolution 248
a. The nationalist smear 249
b. The anti-immigrant and racist smear 253
The raging counter-revolution against Brexit 261
a. The political dimension 262
b. The economic dimension 267
The options for the victims of globalization following the Brexit vote 274
a. Adopting a variation of the present model 274
b. Breaking with the NWO of neoliberal globalization 276

Chapter 11. National and Social Liberation Fronts Everywhere 321
Why a front for social and national liberation (FNSL) 321
The social and political subject of the Front 326
a. The social subject 326
b. The political subject: ‘from below’ or ‘from above’? 327
An intermediate socially-controlled market economy 329
Stage I: The short-term tasks of a FNSL government 330
Stage II: Medium-term tasks 332
Stage III: Long-term tasks 333

“The New World Order in Action ranks with Karl Polanyi’s The Great Transformation as essential reading for understanding the evolution of our dominant institutions. But where Polanyi’s book comes closer to helping us understand their origins, Fotopoulos treats the most recent stage in the consolation and expansion of transnational elite power. What role do the BRICS countries play in this New World Order? What led to the crisis in Greece? How do we understand the Transatlantic Pact and the other most recent trade agreements in helping us contemplate the future of this new order? Fotopoulos addresses all of these questions and more. Most significantly, he reveals how the manufactured war on Islamic terror functions as an instrument of the same neoliberal globalization that effected the 2014 CIA-inspired coup in Ukraine and that continues to wage an economic war on Russia that threatens us all with the predictable and possibly nuclear consequences of a third world war. In essence, this book helps us recognize the ominous connections across all of the major events of our day.”—David Gabbard, Professor, Boise State University

“Takis Fotopoulos is among the most important voices on the left today. We ignore his formidable analysis of contemporary geopolitics in The New World Order in Action at our own peril. A must read for all those who are seeking ways to challenge the terror of neoliberal capitalism.”—Peter McLaren, Distinguished Professor in Critical Studies Co-Director, The Paulo Freire Democratic Project College of Education, Chapman University

“I would like to express my total agreement with the central thesis of the book that it was the intellectual failure of the Left to grasp the real significance of neoliberal globalization that led to its political bankruptcy. The inevitable consequence was the rise of a neo-nationalist movement in Europe, which is embraced by most of the victims of globalization, particularly the working class that used to support the Left.”—Arran Gare, Professor in the Faculty of Life and Social Sciences at Swinburne University of Technology in Melbourne, Australia

“Takis Fotopoulos is one of the most expansive, tireless militants of the new global Left, reinvigorating and carrying forward the neglected currents of emancipatory socialism into a 21st century in desperate need of them.”—Dr. Chamsy el-Ojeili, Lecturer, Sociology, School of Social and Cultural Studies, Victoria University of Wellington, New Zealand