The HIGH PRIESTS of WAR 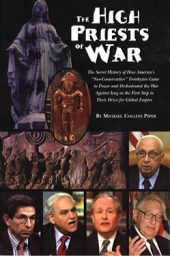 The High Priests of War is a non-fiction book that resembles a Gothic horror novel, a classic tale of a haunted house and the evil spirits that dwell within, the story of a wealthy young king—scion of a famous family—ensconced in a stately palace and endowed with great powers, yet surrounded, even possessed, by malevolent demonic forces manipulating him from “back there in the shadows.”

But the high priests of war exist in real life. The damage these neoconservative war-mongers are doing to America and the world is immense.

If these neoconservatives continue in their reign of ruin,we should not be surprised to see the White House end up looking once again as it did after being gutted by British torches in 1814: whether the consequence of a popular rebellion by angry patriotic Americans or the result of an attack by foreign forces determined to stop dead the intrigues of the high priests of war.

One thing is certain:

A United States Senator Speaks Out:

Why Americans are really dying in Iraq . . .

“With 760 dead in Iraq and over 3,000 maimed for life, home folks continue to argue why we are in Iraq—and how to get out . . . Even President Bush acknowledges that Saddam Hussein had nothing to do with 9-11. . . Of course there were no weapons of mass destruction. Israel’s intelligence, Mossad, knows what’s going on in Iraq. They are the best. They have to know. Israel’s survival depends on knowing. Israel long since would have taken us to the weapons of mass destruction if there were any or if they had been removed. With Iraq no threat, why invade a sovereign country? The answer: President Bush’s policy to secure Israel.”

(For making these forthright remarks, in a column in which he also specifically named several of the “high priests of war” described in this book, Sen. Hollings—a longtime friend of the U.S. military—was harshly denounced by the Anti-Defamation League and a host of politicians eager to curry favor with the Israeli lobby. Yet, just shortly before, a respected Jewish newspaper, Forward, stated that Israel had benefited from the Iraq war—“uniquely” it said—and that Israeli intelligence had provided information used by the Bush administration to justify the invasion of Iraq. See below for whatForward said.)

“On the eve of the war, Israel was a quiet but enthusiastic supporter of America’s war plans. Saddam Hussein’s military power, it was universally agreed, made him one of the Jewish state’s most dangerous adversaries . . . His overthrow was seen as eliminating Israel’s most serious existential threat . . . [and Israel] eagerly cooperated . . . sharing information on Iraqi capabilities and intentions . . . meant to help the American action . . . . But because Israel uniquely benefited from a war that is increasingly controversial in America and around the world, fears of speaking out have grown even stronger than they were before the war.”