The Deep State Prophecy and the Last Trump

View cart “JIM TUCKER’S BILDERBERG DIARY” has been added to your cart. 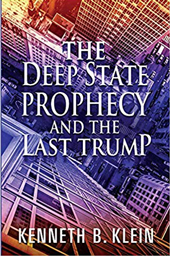 Where the spiritual world intersects with the political world…

This book is about medicine; the antidote and prescription for staying the plague of ignorance overcoming the U.S. and the world. It is about the restoration, if not for the soul of a nation, at least the restored mind of individuals. It is a gathering of missing pieces to a puzzle extracted from the annals of time. It is a crystal clear picture painted from the heavens, an eye salve for healing smoke-filled eyes and the restoration of faraway vision.

As the sands of time dwindle, history has played out exposing hidden pieces to a great prophetic puzzle. The fog of religious doctrine long shrouding short-sighted minds has lifted. Men can see clearly now, as longstanding prophetic theories are exposed by the purifying light of the real facts.

New York City is the story world of the great intrigue and holds the clues to a remarkable story. Why? Because NYC is the citadel of world commerce, the home state of the Trump-eter, but most importantly it is the residence of the Great Beast: the United Nations, the nerve center for the globalization of the planet earth.

All the pieces fit together tightly, in high definition, in The Deep State Prophecy and the Last Trump.

Author and documentary filmmaker Ken Klein has thousands of followers on his online university and millions view his films. Klein’s interest in film production and writing came after stumbling onto the writings of ancient prophets. Ken takes on life’s greatest mysteries, rips the cover off, and exposes them through fascinating and riveting films and books.