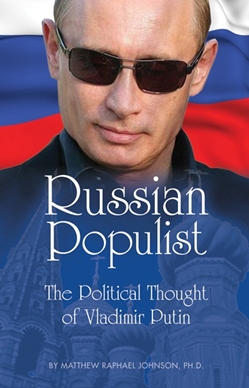 Matthew Raphael Johnson received his Ph.D. in comparative politics and political theory from the University of Nebraska in 1999. Working largely on classical political thought throughout the 1990s, he shifted to Slavic studies near the end of his graduate education. His first book, published also by The Barnes Review, was The Third Rome: Holy Russia, Tsarism and Orthodoxy. He has also published widely on Balkan politics, Russian and Ukrainian literature, as well as contemporary politics through the lens of the Orthodox church. An increasingly well known expert on Russian history, Matt has written numerous articles that have been published in major journals in several languages.

His first position out of graduate school was to assist in researching (and eventually editing) The Barnes Review, and doing research and writing for both The Spotlight and later, American Free Press. Converting to the Russian Orthodox Church in the late 1990s, Johnson also received a monastic theological education from the Monastery of the Holy Name in West Milford, NJ. Married with two young children, Johnson makes his living writing as a freelance researcher, teaching at several universities, and writing full-time in the anti-globalist movement.

He is also author of several books in addition to The Third Rome, including: Sobornosti: Essays on the Old Faith; Heavenly Serbia and the Medieval Idea; Orthodoxy, Autocracy, Nationality: Lectures on Medieval Russia and The Ancient Orthodox Tradition in Russian Literature.

One of Johnson’s overarching projects is to continue the work of Gogol in reconciling Ukrainian and Russian nationalism through the lens of a shared Orthodox faith and monastic tradition.

Synthesizing the Romantic movement of Herder and Kostamarov with the Orthodox, Slavophile approach to philosophical topics is his all consuming idea. Convinced that the East is well poised to continue the battle against globalization, Johnson’s approach is to borrow heavily from the Orthodox monastic tradition is situating man within an ethnic, agrarian and localist order.

45 in stock (can be backordered)

Russian president Vladimir Putin is one of the most reviled politicians in the West. At the same time, few leaders worldwide have maintained such high levels of popularity. Putin’s political and economic successes are too startling to be ignored. From his appointment as vice president on New Year’s Eve 1999, Putin has assisted in the rebuilding of a shattered country in a few short years. With high rates of economic growth, military and police reform, and a concerted attack on official corruption, Putin has become a trusted populist leader and a significant figure in global nationalism, non-alignment and multipolarity. This book attempts to synthesize the basic political views of Putin. It does not deal much with policy, but rather, it centers on the ideas that drive Putin and his reform plans in both domestic and foreign policy.

A new book has emerged from Dr. Matthew Raphael Johnson, former editor of THE BARNES REVIEW Revisionist history journal that explains why nationalists across the globe are calling Russian President Vladimir Putin “The Russian Populist.” Dr. Johnson, an acknowledged expert on Russian and Slavic studies, tells us exactly what makes Vladimir Putin tick in his new book Russian Populist: The Political Thought of Vladimir Putin.

From Putin’s rise to political power, through his crushing of the “Oligarchs,” and up to today’s frequent clashes with Western meddlers, Johnson lays out the policies that Putin has put in place to restore Russia to the glory days of old.

While the mainstream media portrays Putin as a hardline Bolshevik in wolf’s clothing, Johnson shows how Putin’s many agrarian, industrial, social and financial reforms—almost invariably implemented for the benefit of the future of Russia—reveal Putin’s true motives. He has in fact garnered such hostility from the United States simply because he has managed to do what the U.S. has not: create powerful economic alliances outside the control of the New World Order.