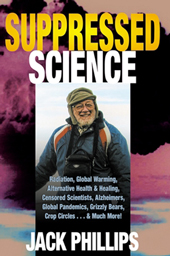 Are cures for cancer being suppressed by the mainstream medical profession to protect corporate profits? Is what we are being told about global warming true, or is there a hidden agenda? How many alternative scientific theories and ‘fringe’ practitioners have been suppressed by the power elite to maintain their stranglehold on what, and what not, the American public is allowed to know?

In Suppressed Science: Radiation, Global Warming, Alzheimer’s, Grizzly Bears, Crop Circles and More, chemical engineer, amateur climatologist, author, USAF major (Retired) and, yes, rocket scientist Jack Phillips delves into these questions and many more as he uncovers the facts behind the facade of lies that fronts for modern science.

Mercury and Diseases of Young and Old

According to Dr. Haley, Chairman of the Chemistry Department of the University of Kentucky, some of whose publications can be found in the Proceedings of the National Academy of Sciences, mercury, and only mercury, causes all the abnormal biochemical reactions that kill neurons and cause Alzheimer’s disease (AD). He has found that laboratory cultures of neurons, when treated with mercury, form the tangles and deposits observed when the brains of people with AD are autopsied.

Since the FDA, the NIH and the Alzheimer’s Research Foundation generally refuse to support research on toxic metals as a cause of disease, much of the research on which Dr. Haley based his research was accomplished in other countries.

He claims that mercury fillings are a major source of our body burden of mercury. He finds that dental amalgam generates colorless mercury vapor at room temperature, which can be observed with the EPA’s mercury sniffer. Brushing the amalgam or immersing it in hot coffee substantially increases emission. He can kill neurons in culture with water in which amalgam has been soaked.

Dr. Robert J. Rowen’s “Second Opinion” letter of April 2005 notes that vaccines also contain thimerosol, a mercury compound, and that adults getting the flu vaccine annually for five years have a substantially increased risk of getting Alzheimer’s disease. He also reports that transdermal applications of a special mercury chelating agent called DMPS has been found effective in helping autistic children, who are also affected with mercury toxicity. . . .