SUICIDE of a SUPERPOWER: Will America Survive to 2025? 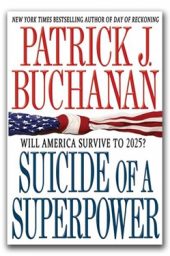 America is disintegrating. In a few decades, our America will be gone forever. In its place will arise a country unrecognizable to our parents.

This is the thrust of Pat Buchanan’s Suicide of a Superpower.

The author of six bestsellers traces the disintegration to three historic changes:

America was born a Western Christian republic, writes Buchanan, but is being transformed into a multiracial, multicultural, multilingual, multiethnic stew of a nation that has no successful precedent in the history of the world. Where once we celebrated the unity, the melting pot and shared experience that the Depression and World War II gave us, our elites today proclaim, “Our diversity is our greatest strength!”—even as racial, religious and ethnic diversity are tearing nations to pieces.

“Buchanan is an honest writer who … minces nothing except an occasional opponent.”―The Philadelphia Inquirer

“Nobody turns a sharp phrase, drops an historical reference, or makes a literary allusion as naturally as Pat Buchanan.”―Human Events

“Buchanan is a muscular writer, fully in command of the English language he feels is under siege. He is adept at linking history, statistics, and the writings of philosophers and economists to proffer forceful arguments.”―The Washington Post

“Mr. Buchanan … is positively fearless. He is also right.”―Tony Blankley, The Washington Times

“His approach is that of a true conservative, offering a perspective rooted in American tradition initiated by Washington.”―Kirkus Reviews

“Suicide of a Superpower traces the changes in governance and culture in America that foreshadow a decline of epic proportions. … Buchanan is no stranger to controversy. Nor is he prone to exaggerate. The crises he describes are real, and he is not afraid to say they ‘may prove too much for our democracy to cope with.’”―Jack Kenny, The New American Magazine

“A stunning Jeremiad on America’s decline, written with characteristic muscle and wit.”―Timothy Stanley, The Telegraph (UK)

“Buchanan offers an astute diagnosis of America’s problems and gives constructive suggestions to put us back on track.”―Virgil Goode (Former Congressman R-Va.), The Daily Caller on Suicide of a Superpower

Patrick Buchanan has been a senior advisor to three presidents, twice a candidate for the Republican presidential nomination, and the nominee of the Reform Party in 2000.

Born in Washington, D.C., Mr. Buchanan was educated at Gonzaga High School where he was graduated first in his class in 1956. He attended Georgetown on a full academic scholarship, and was graduated with honors in English and Philosophy in 1961, and inducted into the university’s Gold Key Society. He received a master’s degree from the Graduate School of Journalism at Columbia in 1962. At 23, he became the youngest editorial writer on a major newspaper in America: The St. Louis Globe-Democrat.

After arranging a meeting with former Vice President Richard Nixon in December of 1965, Mr. Buchanan became the first full-time staffer in his legendary comeback. He traveled with the future President in the campaigns of 1966 and 1968, and to the Middle East, Africa, and Israel in the immediate aftermath of the Six Day War. From January of 1969 to August of 1974, he was a Special Assistant to President Nixon, and worked with the president on the Cambodian invasion speech and with Vice President Agnew on many of his speeches on the media and student disorders.

Mr. Buchanan was a member of the official US delegation to the Peoples Republic of China in 1972, and attended the Moscow-Yalta-Minsk summit of 1974. After President Nixon’s resignation, Mr. Buchanan served President Ford until October of 1974.

After leaving the White House, Mr. Buchanan became a nationally syndicated columnist, and in May of 1982 began as a panelist on NBC’s “The McLaughlin Group” and a co-host of CNN’s new show “Crossfire.”

In 1985, Mr. Buchanan returned to the White House as Director of Communications. He accompanied President Reagan to his Geneva summit with Mikhail Gorbachev and was with President Reagan in Hofde House at Reykjavik, which has been described as the decisive summit of the Cold War. On leaving the White House in 1987, Mr. Buchanan returned to journalism, his syndicated column, and to “The McLaughlin Group,” “Crossfire,” and began hosting a new show, “Capital Gang” on CNN.

In December 1991, Mr. Buchanan challenged President George H. W. Bush for the Republican nomination and almost upset the president in New Hampshire, winning 3 million votes in the GOP primaries. In August 1992, Mr. Buchanan opened the Republican convention in Houston with his speech on the “culture war,” which is now ranked among the most controversial in convention history. In 1996, he ran a second time for the GOP nomination, won the New Hampshire primary, and finished second to Sen. Dole, again, with 3 million Republican votes.

After winning the nomination of the Reform Party in 2000, Mr. Buchanan retired from politics and became again an author, columnist, and a commentator on MSNBC for almost a decade.

Mr. Buchanan has written 14 books, including seven straight New York Times bestsellers: A Republic, Not an Empire; The Death of the West; Where the Right Went Wrong; State of Emergency; Day of Reckoning; Churchill, Hitler and The Unnecessary War; Suicide of a Superpower; and The Greatest Comeback: How Richard Nixon Rose from Defeat to Create the New Majority. His newest book is Nixon’s White House Wars.