View cart “HILLARY (AND BILL): The SEX Volume” has been added to your cart. 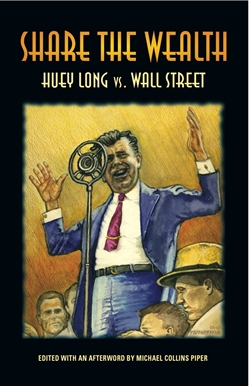 Share the Wealth: Huey Long vs.Wall Street
Why weep or slumber, America?
Land of brave and true,
With castles, clothing, and food for all
All belongs to you.
Ev’r y man a king, ev’r y man a king,
For you can be a millionaire;
But there’s something belonging to others,
There’s enough for all people to share.
When it’s sunny June and December, too,
Or in the wintertime or spring,
There’ll be peace without end,
Ev’r y neighbor a friend,
With ev’r y man a king.
— From “Ever y Man a King”
The theme song of Huey P. Long’s
“Share the Wealth” movement
Lyrics by Huey P. Long

Edited with an afterword by Michael Collins Piper

Share the Wealth: Huey Long vs. Wall Street is a panoramic overview of the life and times of the legendary Louisiana populist Huey P. Long. If America had listened to Long, we wouldn’t be in the mess we are today. During the 1930s, the big loud voice of Louisiana Governor (and later, United States Senator) Huey P. Long spoke out against the plutocrats of Wall Street and on behalf of America’s farmers, laborers, small businessmen and the hard-working middle class. He posed a no-holds-barred threat to the rampant predators of the Federal Reserve Money Monopoly and if he had not been gunned down in September 1935, it’s certain that Huey would have played a part in expelling FDR from the presidency. Here’s Huey’s story as told in his own inspirational words—and the words of those who knew him best, both friend and foe alike…