View cart “IKE’s CENSORED WWII Holocaust PDF” has been added to your cart. 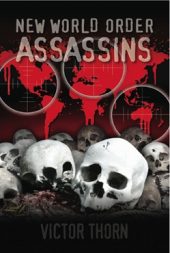 Get a special combo price when you order Victor Thorn’s NEW WORLD ORDER ASSASSINS book as well as the 50-minute audio interview on CD!

The stories behind the headlines that made news across the globe. Murderers, hit men, guru cult leaders, school shooters, and cold-blooded political killers . . . In this exposé by AMERICAN FREE PRESS’s no-holds-barred investigative reporter Victor Thorn, 16 of the most high-profile cases that have shocked citizens in America (and the world) for the past 50 years are tackled. We guarantee you have never seen this information assembled in one book before!

NEW WORLD ORDER ASSASSINS delves into the sordid details that had previously been suppressed by official government sources and the mainstream media. More importantly, Thorn reaches conclusions that far transcend even those compiled by other conspiracy researchers. The results will make readers reevaluate not only these pivotal events of history, but also the forces that don’t shy away from bloodshed, orchestrating the deaths of presidents, politicians and public figures—all to further their nefarious agendas. Dangerous information the historians “forgot” to reveal . . . In other challenging works, Victor Thorn has chronicled the inside story of 9/11, the Waco massacre, the Oklahoma City bombing fraud, the victims of the Clinton body count, the inside story of Jonestown, and the USS Liberty massacre. Now, Thorn uncovers a treasure trove of forbidden history in a new book that shakes the foundation of our popular culture. . . .

Be prepared to spiral down a rabbit hole that delves even deeper into a realm that most people don’t even know exists. NEW WORLD ORDER ASSASSINS teems with long-lost secrets that Big Brother thought he’d flushed down the Memory Hole. In an age of increased political correctness, Thorn isn’t afraid to address taboo subjects or slaughter the government’s most cherished sacred cows. . . .