Inside the Black Vault: The Government’s UFO Secrets Revealed 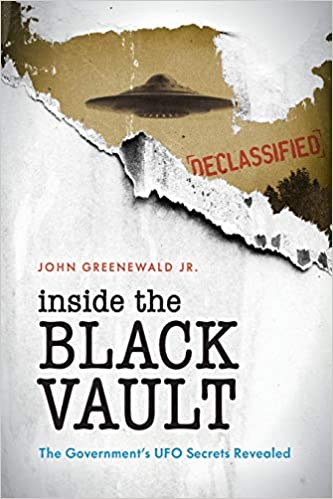 The evidence in this book may not ultimately give you the “smoking gun” you are looking for on your journey, but I guarantee it will give you a box of bullets when you find it. In 1996, John Greenewald, Jr. began researching the secret inner workings of the U.S. Government at the age of fifteen. He targeted such agencies as the CIA, FBI, Pentagon, Air Force, Army, Navy, NSA, DIA, and countless others. Greenewald utilized the Freedom of Information Act (FOIA) to gain access to more than two million pages of documents. This archive includes information relating to UFOs, the JFK Assassination, chemical, biological, and nuclear weapons, and top secret aircraft. He took the millions of pages, and over the course of more than two decades, has built an archive known around the world, as The Black Vault. Inside The Black Vault: The Government’s UFO Secrets Revealed takes you on a journey within the secret world of unidentified aerial phenomenon that has plagued the military since at least the 1940s. Declassified records prove that the UFO topic is one of the most highly classified and most elusive subjects the U.S. Government has ever dealt with. Each chapter explores various agencies and their documents, and Greenewald breaks down the meaning of why some of the most important documents are relevant to proving a massive cover-up. Along with declassified documents, Greenewald outlines the struggle it took him to get them. No other topic has proven so difficult, in more than 8,000 FOIA requests that he has filed. He explores why that might be and meets skeptics and debunkers head on, outlining why some of their more prominent rebuttals for it all cannot be true.

John Greenewald, Jr. began researching government conspiracies at the age of 15. For more than two decades, he has turned his popular website, TheBlackVault.com, into one of the internet’s premiere resources for officially declassified U.S. Government documents, totaling more than 2,000,000 pages. Greenewald is also a television producer, having helped create a variety of programs for outlets such as the History Channel, National Geographic Channel and the Discovery Channel, and has been a guest on hundreds of radio and television programs throughout the globe.
Paperback, 192 pages, $16