I Rode with Tupper 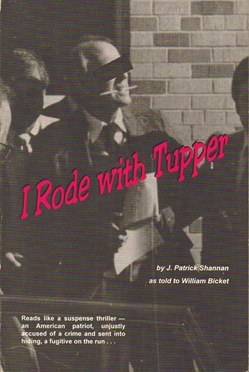 The rain falls from only one source–the clouds. Once on earth, it ends up in many places: ‘on deposit’ in lakes and oceans; ‘in circulation’ in rivers and streams; and eventually, it returns, via evaporation, to the sky. There is a balance between the amount leaving the earth via evaporation and the amount returning as rain. Were that not the case, we would end up either flooded or a desert.

Suppose now that the only source of rain, the clouds, were to regard the rain which fell upon the earth as a loan, to be repaid with interest. In other words, more water would have to be evaporated than provided by rainfall. How could earth return to an only source more than it was given? That is the question to ask regarding our money. How can the borrowers of the country return to the banks more than was borrowed? Principal, after all, was borrowed. But principal plus interest must be returned. How can this be done?

It can’t, except by borrowing money that that must be repaid and that’s where your government comes up with another illusory term, ‘deficit spending.’

A Constitutional Republic, such as the United States of America, is set up with rule by law. The majority rule ends at the ballot box where we elect our representatives to oversee that Republic and law. Each takes an oath to “uphold and defend the Constitution of the United States.” When that republic evolves into a democracy, such as in the United States today, fifty-one percent can be brainwashed into overriding that supreme law and force the other forty-nine percent to do whatever. It then is no longer rule by law (God) but rule by man.

The Passing of Tupper Saussy

Tupper Saussy started life by displaying the contempt for authority that would mark both his life and his art for seven decades to come. Let him tell the story:

“My aunt, who was there, told how I was born. My grandfather delivered me from his daughter at home. He was an M.D. When he hoisted me high to examine my parts, I peed in his face.”

Saussy, who died suddenly on Friday at the age of 70, is likely to be remembered as one of the great personalities in Nashville history, a man described over and over by friends and observers with the cliché “larger than life.” He filled many different roles over the years, but he played each one with panache, wit and fierce originality.

As a teacher at Montgomery Bell Academy, fresh out of the University of the South in 1958, Saussy so dazzled his young charges that he was later suspected (erroneously, according to the screenwriter) of being part of the inspiration for the manic teacher in the film Dead Poets Society. He had a quality about him, son Haun Saussy remembers, that “made us not only smarter but more aware.”

As an ad-man, Tupper Saussy co-founded a thriving Nashville agency in the early 1960s that was fueled by his amusing jingles and witty wordplay. McDonald Saussy Advertising Agency made its name with a Purity Dairies campaign featuring a cow, a kangaroo and the slogan “Don’t pay no ‘tention to kangaroos.” Other clients included some of Nashville’s most prominent businesses of the day, such as Genesco, Commerce Union Bank and May Hosiery Mills.

“He came and charmed Nashville,” author David Halberstam later told a Nashville Scene interviewer. Halberstam was working for The Tennessean at the time. “He played the piano and married a beautiful woman. They were the golden couple. Everything seemed to be his.”

When he grew tired of advertising and turned to music full-time, his band, Neon Philharmonic, turned out an album that attracted two Grammy nominations in 1970. Over the years, his songs have been recorded by such a diversity of artists as Shaun Cassidy, Perry Como, Chet Atkins, Al Hirt, Brenda Lee, Ray Stevens, Roy Orbison and Patti Page.

As his commercial music career faded out, Saussy became a restaurateur, briefly, and the paintings he executed to hang on the walls of the café led to yet another career in art. Encouraged by a leading collector, he produced and sold a large portfolio of works, many painted on paper bags.

And then Saussy became a tax protester. Feeling “bullied” by the Internal Revenue Service, he spent the last half of the 1970s reading and thinking about taxation and personal liberty. “He had an extremely demanding idea of what freedom is,” son Haun remembers.

Saussy became a figurehead for radical anti-tax and anti-government activists across the country after he published The Miracle on Main Street in 1980. The book advised protesters on tactics for challenging and circumventing America’s taxation and monetary systems. Saussy followed his own advice, and in 1985 he was convicted of willful failure to file tax returns. The trial judge, after hearing out Saussy’s theories, said to him: “You’re so intelligent it hurts you.”

While his case was on appeal, Saussy became attracted to a conspiracy theory about the murder of Dr. Martin Luther King Jr. in 1968. He got to know James Earl Ray, who had been jailed for the murder, and ghosted Ray’s autobiography, Tennessee Waltz, which asserted Ray’s innocence.

On April 10, 1987, Saussy turned up at a side door of the federal prison in Georgia where he was supposed to begin serving a one-year sentence. He had himself videotaped making a defiant statement about his case, which was sent to a Nashville television station, and then he disappeared.

For the next decade, Saussy lived on the run. Friends in Nashville would occasionally drop hints that they had been in touch with him, but he remained elusive. He came to believe that the government was not that interested in catching him, calling himself “the least wanted man in America.”

Finally, in November 1997, federal agents caught up with Saussy. Captured without incident in California, he was sent to prison for a term that lasted 20 months.

Saussy returned to Nashville seemingly as popular as ever among his old friends in Belle Meade. In recent years, he revived his music career with a band called the Chocolate Orchid Piano Bar. “It’s the ideal piano bar,” he told an interviewer from the London newspaper The Guardian last year – a place “where only standards are played, standards nobody has ever heard before. One where the pianist sings his own songs that already seem familiar to you.”

In his later years, Saussy was as mild-mannered and cheerful as ever, but no less committed to the ideas that landed him in prison. In the most recent article published on his website, Saussy called the United States “a war-making corporation, having a beast’s capacity to exercise life and death power over its inferiors.” He endorsed a recently published book as having showed that “the whole 9/11 attack on America was masterminded and overseen by Dick Cheney.”

Haun Saussy says of his father: “You didn’t have to agree with everything he said. Some of the best ideas I have ever had, I got by disagreeing with him.”

A memorial service in honor of Saussy will be held on Friday, March 23, at Christ Church Cathedral in Nashville. The family visitation will begin at 12:30, with the service at 2:00. Burial will take place in Statesboro, Ga.

Investigative journalist, author and radio show host Pat Shannan has been in pursuit of the truth for nearly half a century. Intrigued by the deception and on-going cover-up of the JFK assassination, he began to notice a similar pattern in the 1968 murders of Martin Luther King and Robert F. Kennedy. Then he found altered and intentionally fabricated FBI official reports regarding these and other cases and began to notice the cooperative news media ignoring blatant and pertinent facts as well.

The films of Ronald Reagan exiting the Washington Hilton clearly show Secret Service Agent Tim McCarthy being shot by someone other than John Hinckley, Jr. And what are the odds that the greatest potential beneficiary of Reagan’s demise would be the close friend and business associate of John Hinckley, Sr.? Why did the wounded Reagan arrive at the hospital 15 minutes after Jim Brady, when his limo left the scene five minutes before Brady’s ambulance?

How could Arthur Bremer fire seven shots from a five-shot revolver the day he nearly killed Gov. George Wallace and three innocent bystanders in 1972? Why was Pat Tillman murdered in Afghanistan in 2004?

Shannan has long maintained that the hidden power behind the expansion of the central government has been the unconstitutional use of legal tender that is produced at will, and herein proves his case. He also shows that government plots survive because of little or no investigation, and only through the aid of a cooperative news media can such ridiculous conspiracy theories as the 9-11 official story not only survive but thrive.

Pat Shannan’s memoirs while ‘on the run’ with famed political dissident Tupper Saussy. “It ought to be required reading in order to graduate high school,” says one current political prisoner, “but many high schoolers can’t even read.”

Here is the story of writer Tupper Saussy and his flight from federal persecution. Early during his disappearance underground, Saussy contacted his trusted friend for help. Author and journalist Pat Shannan tells of their traveling together and secret affiliation during Saussy’s 10 + years spent hiding and his own education with an excellent mentor that few can ever claim. The money facts and walk through history in this book are as current today as when they were written. This book is timeless and was the source of Saussy’s problems with the federal government.