View cart “Confessions of an Illuminati: The Whole Truth About the Illuminati and the New World Order (Volume I)” has been added to your cart.
Out of stock Sale! 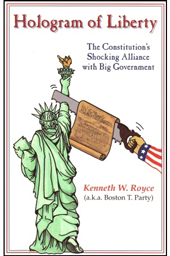 Civic Belief #1: The Congress was given few specific powers. All else was left to the States and to the people under the 10th Amendment. Ample checks and balances protect the Republic from federal tyranny.

Civic Belief #2: The Federal Government has become so powerful only because despotic officials have overstepped their strict, constitutional bounds.

“The Constitution has either authorized such a government as we have had, or has been powerless to prevent it.” Lysander Spooner, No Treason (1870)

Think about that. By either the Constitution’s purposeful design or by its unintentional weakness, we suffer under a federal colossus which takes a third of our lives and regulates everything from alfalfa to xylophones. This is Freedom? So, why aren’t Americans free? Perhaps we weren’t really meant to be!

Hologram of Liberty: The Constitution’s Shocking Alliance With Big Government is a cold splash of water on our civic mythology.Hologram‘s main contention is that the 1787 Convention, its Constitution and Federal Government was the most brilliant and subtle coup d’etat in political history. While the majority of Americans then were Jeffersonian in nature, a few Hamiltonian Federalists eradicated our Swiss-style Confederation and replaced it with a latent leviathan. The Federal Government was given several escape keys to the putative handcuffing by the Constitution. Using the “necessary and proper” and “general welfare” clauses in conjunction with congressional powers under treaty, interstate commerce, and emergency, the “Founding Lawyers” of 1787 purposely designed a constitutional infrastructure guaranteed to facilitate a future federal colossus. While such a massive government was impossible to erect in the freedom-conscious 1780s, the “virus” of tyranny was cunningly hidden within the Constitution to foment the eventual federal behemoth we are burdened with today. The feds take in a third of economic activity and regulate everything from the price of corn to the size of chimneys and it’s all constitutional!” Oh, it’s only ‘constitutional’ because autocratic Supreme Court Justices say it is!” some would reply.

Yes, but the Framers allowed the Supreme Court, without any check or balance, to approve of federal encroachment on the States and on the people. There is no constitutional avenue for overturning a despotic Supreme Court ruling—and it was designed that way. The feds are allowed to “monitor” themselves, like students grading their own tests. Had the Framers wanted to really check the Supreme Court, they’d have at least created an appellate court (activated by petition) staffed by justices from the States. Had the Framers wanted to really hamstring Congress and the President, they would have given the people a “no-confidence” device to remove traitorous officials in midterm. Had they wanted to, the Framers could have (as did the Swiss) easily confined the Federal Government—but they didn’t want to. In their opinion, a strong central government—independent of real popular approval—was best for America. The Framers left the federal fleas in control of their own flea powder, and that’s why we have such an unchallengeable government today.

Most conservatives and libertarians believe that the Constitution and its Framers were Jeffersonian and laissez-faire. They were not, and they never claimed to be. This Jeffersonian gloss is echoic of two things: 1) What the Constitution was sold as to the people through The Federalist, and 2) How the Constitution, according to Jefferson, should have been interpreted under strict constructionism. Add the Red, White, and Blue, July 4th, the Founding Fathers and George Washington and you’ve got a civic religion with its unique parchment worship. There are but three ways to view anything, including the Constitution:

Friends of freedom have gazed dreamily at the Constitution for two centuries, fusing #1 with #2 to create a false #3. We need to snap out of our parchment worship and coldly study the predicament of Liberty—before it’s too late. Liberty-loving folks need to quickly understand that freedom is not well-served by the current Constitution. Neither is tyranny. It is Royce’s firm opinion that the Constitution will be radically amended, if not abolished altogether, by “us” or “them” within 10 years. Royce proves that the States and the people were politically “checkmated” at ratification, and discusses his three peaceful solutions prior the imminent insurrection now brewing. The goal of Hologram of Liberty is to spark an active synthesis of Libertarians, Patriots, and Conservatives to prevent a 21st century Dark Age in America.

There hasn’t been an innovative theory about the Constitution in 84 years, since Charles Beard’s An Economic Interpretation. We are long overdue for a paradigm shift to political reality. It’s time to complete the story with Hologram of Liberty, the Jeffersonian/anti-federalist epilogue. Our window of opportunity for reestablishing freedom is quickly running out and we simply don’t have time for comforting old fantasies. Hologram of Liberty is the freshest research on the Constitution since 1913.