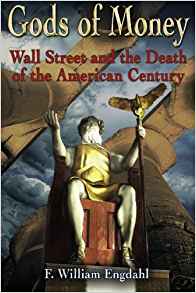 By F. William Engdahl. This is a book about power and about an extraordinarily wealthy elite that has wielded unprecedented power, not for the good, but rather for the enhancement of their own private position. The book tracks the evolution of the power amassed by a tiny group of men who have regarded themselves, quite literally, as gods—the Gods of Money. Their agenda has included assassinations of two of America’s most popular presidents; involvement of the United States against the public will in two world wars; and detonation of the world’s most destructive weapon, the atomic bomb, on Japanese civilians. It has included scores of regional wars, political assassinations, coups, and systematic corruption of the body politic. The book reveals in an unusual and surprising manner how this powerful elite has systematically set out to literally control the entire world, backed by the most powerful military force in the world. Softcover, 390 pages.