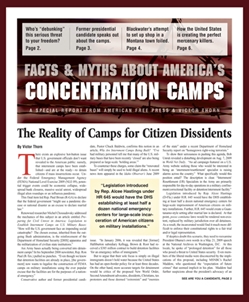 A SPECIAL REPORT from AMERICAN FREE PRESS and VICTOR THORN

There exists an explosive hot-button issue that U.S. government officials don’t want revealed to the American public: namely, that internment camps have been established—and are at the ready—to detain citizens if mass insurrections occur.

Why is the U.S. government planning for a civilian mass insurrection? Are they building these prison camps for us?

Spread the word about the plans members of Congress and the U.S. government are discussing about how to handle large numbers of civilians in a “national emergency.” These camps could be for illegal aliens, but the talk is these camps would more likely be for housing mass numbers of people in the event of a catastrophic—and perhaps impending—disaster. We have already seen forced gun seizures in U.S. cities after natural disasters. Will those who refuse to give up their guns during an insurrection be imprisoned? Or are all the rumors just scare tactics to help ease the implementation of a darker agenda?