APOCALYPSE: Are You Prepared? DVD 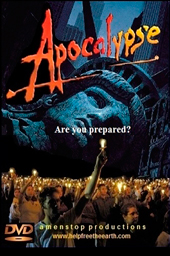 Christians believe that Jesus is about to return and save them from impending apocalypse described in the Book of Revelation.

“New Agers” believe that friendly aliens from the Galactic Federation will rescue them and that humanity is now entering a golden age of higher consciousness.

Trend forecaster Gerald Celente warns people to “get real” and prepare for the imminent global economic collapse. His survival strategy is the three Gs—guns, gold, and a getaway plan.

Find out what steps you can take mentally, physically, emotionally, and spiritually to prepare for what’s ahead.

From the Film Maker

Have you ever heard the expression, “You can’t change the world”? While billions of people repeat this passive expression to themselves, a handful of illuminati ruling families are actively looting, poisoning, killing, colonizing, and enslaving the world with endless wars and impossible debt . . . and guess what? They’re doing it with your tax dollars!

Hi. I’m Grace Powers, the creator of Help Free The Earth and the producer of the Ring Of Power documentary series. As a child, I learned that my father was a member of the secretive cult of Freemasonry. I recall many arguments between my parents over my father’s secret meetings and the exclusion of women from the brotherhood. When I asked my father about the meaning of the letter “G” and the compass and square on his ring, I got no reply. As an adult, I decided to investigate. That investigation grew into six years of intensive research into the identity, history, crimes, and motives of the illuminati globalists who I call the “ring of power.”