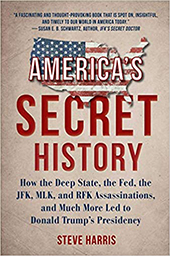 America’s Secret History presents an undistorted picture of the history of the United States beginning from the enactment of the Constitution. Never in one volume have so many unknown facts that disprove America’s history books been brought together in a cohesive historical context, all based on verifiable information. Among dozens of revelations, America’s Secret History ties together a wealth of historical facts from highly credible sources to create a cohesive narrative of uncharted American history that lead us to the presidency of Donald J. Trump.

Consider: Utilizing the House of Representative’s little-known 1953 Reece Committee revelations, the Carnegie, Rockefeller, Guggenheim, and Ford foundations have systematically controlled education and the high-level appointees to the US State Department for the last century with the full knowledge and approval of the United States government. Conclusive proof that Abraham Lincoln’s assassination was actually an attempted coup d’âetat, and President Garfield’s assassination was the first successful coup. JFK’s and the combined assassinations of RFK and MLK-just two months apart-were the third successful coup d’état. All were Deep State initiatives to mold the government into its intended purposes.

In 1971, Americans woke up to what the New York Times called “Nixon Shock,” which completely eliminated the gold standard from American currency. Removing gold backing from America’s money, combined with the soon-to-come rise of globalism, led directly to what the Oxfam charity organization recently announced: 26 people now own the same wealth as the poorest 50% of the world (almost four billion people). Not another conspiracy theory book, America’s Secret History reveals many more hidden truths and the undisclosed context that drove them, weaving all of them together to explain just how we find ourselves in Donald Trump’s America.”

America’s Secret History presents an undistorted picture of the history of the United States. Never in one volume have so many unknown facts that disprove America’s history books been brought together in a cohesive historical context, all based on verifiable information.

Not another conspiracy theory book, America’s Secret History reveals The Truth Behind the Stories They Don’t Want You to Know, weaving all of them together to explain just how we find ourselves in Donald Trump’s America.

“This eye-popping alternative narrative is a page-turner. It reads, in plain prose and devastating detail, like a gripping historical detective story.  Generously entertaining, Steve Harris’s research goes back to places that some American citizens might just as soon avoid, but his presentation is so compelling that we can’t turn away.  And in the process, he shows us just how much static—in the form of misleading mythologies, official sources, and manipulated media—may keep us from getting a clear signal about what is really going on, and has gone on, in American life, with its great issues of wealth and war. This provocative book is a must-read for Americans of the right or left who want to drive their critical thinking to go behind the convenient conventional wisdom to ask, “who benefits” and whether or not we are really in control, as a person, of our democratic destiny.”—Tom McBride, co-author, The Mindset List Of American History, and co-creator, The Mindset List

“In his important new book, America’s Secret History, Steve Harris reminds us that history is always written by the victors, and the narratives doled out to the public are often laughable disinformation. Harris covers the history of false flags, which go back to ‘Remember the Maine’ in 1898, and even covers the important and largely forgotten research unearthed by Norman Dodd for the Reece Committee in the 1950s. This book is especially timely now, in the era of Donald Trump and the massive divide over his personality. The real history of America, as Harris reminds us in this book, makes Trump’s real or imagined offenses seem like child’s play in comparison.”—Donald Jeffries, author, four bestselling books including Hidden History: An Expose of Modern Crimes, Conspiracies, and Cover-Ups in American Politics

“America’s Secret History unravels accepted narratives and weaves together an alternative history that calls into question some of the seminal moments in the nation’s existence. From coup d’états to for-profit wars, it’s all there. In the process, the book provides a glimpse of how money and special interests have controlled the levers of democracy in America. Steve Harris proves that the best way to understand the truth is by questioning it.”—Marc Landas, author, Cold War Resistance: The International Struggle Over Antibiotics

“Steve Harris has written a fascinating and thought-provoking book that is spot on and timely to our world in America today. Whether you agree with all his conclusions or not, his thought process is meticulous as his writing is spare and elegant. It causes you to step back and think, which is the ultimate purpose of great writing! In this, Steve has come through and more! I learned so much from this book, but even more importantly, it gave me so much more insight into what is going on in America today.”—Susan E. B. Schwartz, author, JFK’s Secret Doctor: The Remarkable Life of Medical Pioneer and Legendary Rock Climber Hans Kraus

“With the near-death of the newspaper industry and our pursuit of trustworthy online news, we find ourselves overwhelmed instead with masses of false news, fabricated to keep us on the website. In fact, the media, politicians, and TV celebrities, all have a double agenda designed to conceal the truth behind a facade of lies. When newspaper tycoon John Foster Kane sends his star reporter to report on a revolution, in the famous movie Citizen Kane, he reports back that there is no revolution. ‘You supply the story,’ says the newspaper owner, ‘I’ll provide the revolution.’

“Steve Harris tackles with gusto a whole range of false news, which has been at the forefront of the invention of the United States from its very beginning, in an entertaining and informative way. It might be described as shocking news for a new young generation that needs to be shaken up out of the narcissism of social media to help them grow up to face the truth about the human propensity to lie for the sake of power, money, or fame. Nothing is as it appears on the surface. He describes, in particular, how false news is fabricated to re-engineer national mythologies that falsely explain their past and current mission. There is always another reason for it.

“Then, writes author Harris in his provocative new book America’s Secret History, there are the menaces used to scare us into fighting wars, from Vietnam to Iraq. He spans a varied list of lies about American politics, like the attacks on the indigenous people by America’s pioneers to steal the land; the Vietnam War; JFK’s assassination; Donald Trump’s presidency; American Democracy; Big Business; America’s sphere of influence; the Treaty of Versailles; the Red Threat; the New York Stock Exchange; and other Secret Histories of the United States.”—John Harte, history author, six published books including How Churchill Saved Civilization

“As a child of the 1960s, I look not through the proverbial rose-colored glasses, but through lenses discolored by the calculated disinformation that flooded American lives during my most formative years.  America’s Secret History by Steve Harris is a fantastic read with a rare glimpse at the past highlighting the myriad culprits, including the media, that have led America to a soulless President Trump, who’s unleashed unadulterated ambition, distorted truths, and a dangerous lack of tolerance, moderation, and reason.”—Joanie Holzer Schirm, author, My Dear Boy: A World War II Story of Escape, Exile, and Revelation

“A book with such a long title is predictably two books for the price of one. It does provide dozens of interesting anecdotes—some dating back to President Lincoln’s time—about our nation’s political assassinations. It is also a history of the economic and political forces that shaped the United States—especially those since the turn of the twentieth century.

The year 1898 marked a crucial change in the course of American history, from fulfilling our Manifest Destiny of expanding from sea to shining sea to the building of an overseas empire. It was the year we went to war with Spain, beginning with our intervention in the Cuban revolution and ending with our navy’s seizure of Spain’s Pacific colonial possessions—the Philippines, Hawaii, and Guam.

As Harris notes, unlike the Roman, Spanish, and British empires before us, we confined our ambitions largely to economic and political control by American banks and other large corporations, rather than outright political and military control.

During the first two decades of the twentieth century, we converted the Caribbean into a virtual American lake. By the end of World War II, the American empire straddled most of the globe, with military bases in dozens of countries, and a vast network of economic interests.

While Harris discusses these developments, he does return to his narrative of the assassinations of some of our most prominent political leaders such as President John F. Kennedy, his brother, Senator Robert F. Kennedy, and the Reverend Dr. Martin Luther King, Jr. Because he relies on secondary and tertiary research, Harris does not uncover much that has not already been discovered.

But he does provide an entertaining narrative including stories that most readers will not have yet heard. Although I happen to think that it might have been even better if the author stuck more closely to the promise of its title, he has succeeded in writing a very entertaining book that is accessible to the general reader. Being a prolific published writer, I enjoy good writing. Steve Harris is a very good writer.”—Steve Slavin, author, twenty math and economics books, three volumes of short stories, and a college roommate of Bernie Sanders.

“America’s Secret History reminds me of Howard Zinn’s A People’s History of the United States with a touch of the Illuminati. You may not agree with Steve Harris’s conclusions (or even all of his premises), but this book will definitely make you think, and possibly reconsider, what you think you know about our country.”—Ian Randal Strock, author, The Presidential Book of Lists

Steve Harris is a book publishing veteran of several decades with Warner Books, New American Library, and Penguin, including the last 15 as a literary agent. He began researching the Iraq and Afghanistan wars soon after losing a friend in the Twin Towers.  One startling fact after another was uncovered and verified, until the country’s weird history revealed itself mired in myths, deceptions, and conspiracies.