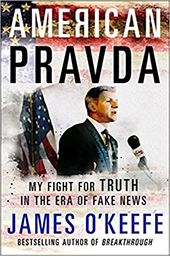 American Pravda: My Fight for Truth in the Era of Fake News

The one real difference between the American press and the Soviet state newspaper Pravda was that the Russian people knew they were being lied to. To expose the lies our media tell us today, controversial journalist James O’Keefe created Project Veritas, an independent news organization whose reporters go where traditional journalists dare not. Their investigative work-equal parts James Bond, Mike Wallace, and Saul Alinsky—has had a consistent and powerful impact on its targets.

In American Pravda, the reader is invited to go undercover with these intrepid journalists as they infiltrate political campaigns, unmask dishonest officials and expose voter fraud. A rollicking adventure story on one level, the book also serves as a treatise on modern media, arguing that establishment journalists have a vested interest in keeping the powerful comfortable and the people misinformed.

The book not only contests the false narratives frequently put forth by corporate media, it documents the consequences of telling the truth in a world that does not necessarily want to hear it. O’Keefe’s enemies attack with lawsuits, smear campaigns, political prosecutions, and false charges in an effort to shut down Project Veritas. For O’Keefe, every one of these attacks is a sign of success.

American Pravda puts the myths and misconceptions surrounding O’Keefe’s activities to rest and will make you rethink every word you hear and read in the so-called mainstream press.

“It’s an entertaining read and it will inspire you and you will be thankful there is a guy named James O’Keefe doing what he’s doing. It’s called American Pravda.”—Rush Limbaugh

“James O’Keefe’s book is revelatory, scandalous, shocking and – yes, funny as hell as well. Told by a youthful but battle-hardened warrior deep in enemy lines of the culture wars, American Pravda pulls back the iron curtains of institutional corruption to reveal a red-rimmed hellscape of falsehood and manipulation. A powerful and inspirational read, highly recommended”—Stefan Molyneux

“This book is a clarion call on behalf of accountability, transparency, and responsible government: items high on the rhetorical agenda of the bureaucrats that run our lives but somehow always forgotten when it comes to their exercising power.”—Roger Kimball

“The mainstream media, led by the Washington Post, New York Times, and CNN, are out for revenge against President Trump for labeling them ‘fake news’ and using social media to get around them, according to an explosive … book by muckraker James O’Keefe.”—Paul Bedard

James O’Keefe is an award-winning journalist and writer. He is the founder and president of both Project Veritas and Project Veritas Action, non-profit organizations dedicated to investigating corruption, dishonesty, waste, and fraud in both public and private institutions.

O’Keefe’s series of voter fraud exposés inspired several states to reform their election laws, forced resignations in Washington, and pushed FBI and Department of Justice officials to defend themselves before federal lawmakers.

The Nation magazine wrote, “O’Keefe’s influence on voting rights opponents and legislators alike is particularly jarring.” Slate.com agreed, “O’Keefe has had more of an impact on the 2012 election than any other journalist.”

In 2013, O’Keefe authored New York Times bestseller, Breakthrough: Our Guerilla War to Expose Fraud and Save Democracy, the inside story of the challenges he faced bringing his powerful new form of guerilla reporting to the forefront.

In May of 2014, O’Keefe released videos at the Cannes Film Festival showing Hollywood environmentalists agreeing to take money from phony Middle Eastern oil tycoons to fund anti-fracking movies. The videos prompted a U.S. Senate investigation into the funding sources of NGOs.

During the summer of 2014, an investigation by Project Veritas transformed the discussion on national security. Dressed as Osama bin Laden, James O’Keefe crossed the Rio Grande from Mexico into the United States. In a follow-up video, Project Veritas exposed the lack of security at the northern border as an investigator dressed as an ISIS terrorist crossed Lake Erie into Cleveland. In his grilling of officials from the Department of Homeland Security, Senator John McCain referenced the investigations as proof of the failure to secure the border.

Heading into the crucial fall elections of 2014, James O’Keefe launched Project Veritas Action, which launched investigations in four key Senate battleground states to expose the hypocrisy of candidates who were saying one thing to the voters and something entirely different to their close supporters. All four Senate candidates exposed by O’Keefe lost their races, some by incredibly narrow margins.

During the 2016 election cycle, both Project Veritas and Project Veritas Action released videos exposing key Democrats not only admitting that voter fraud exists, but also showing how to successfully commit it on a massive scale. One result was that a New York City Democratic election commissioner was forced out of his position by Mayor de Blasio and the New York Assembly.

O’Keefe also released videos exposing how the Democratic National Committee and Hillary Clinton worked with consultants to organize paid protesters at Trump rallies, which sometimes erupted in violence. The investigation into Democracy Partners caused two key Democratic operatives to resign, sparked a response from the White House, and caused Donald Trump to bring up the videos in the final presidential debate. O’Keefe was ultimately credited with having a significant impact on the 2016 presidential elections for his “October Surprise” video series.

O’Keefe is a graduate of Rutgers University. He founded an independent newspaper in college called The Centurion. He is a 2014 recipient of the Young Professional Conservative Leadership “Buckley Award” awarded to “young professionals in recognition of significant achievements in advancing the conservative cause.” He is the recipient of the Robert Novak Award for Journalistic Excellence (2011), has been named “Fox News Power Player of the Week” twice, and was on the Forbes “30 Under 30” for media moguls.