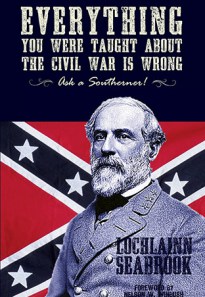 By Lochlainn Seabrook. Did You Know That . . .

American slavery got its start in the North
Abolition began in the South
Robert E. Lee was an abolitionist
Only 4.8% of Southerners owned slaves
95.2% of Southerners did not own slaves
Abraham Lincoln was a White separatist
Jefferson Davis adopted a Black boy
Jefferson Davis freed Southern slaves before the North
Lincoln was not against slavery
Lincoln wanted to segregate Blacks
The U.S. was originally called the Confederate States of America
Lincoln won both the 1860 and 1864 elections with less than 50% of the vote
Thousands of Blacks and American Indians owned slaves
Lincoln started the Civil War
The Northern armies were racially segregated
The Southern armies were racially integrated
After emancipation, 95% of Blacks voluntarily remained in the South
Approximately 500,000 African-Americans fought gallantly for the Confederacy
The original Ku Klux Klan had thousands of dedicated Black members
The South is still recovering from the war
True slavery was not practiced in the South
Many Northern generals, like U.S. Grant, owned slaves
Most Southern generals did not own slaves
Many Union generals said they would not fight for abolition
Lincoln was a big government liberal
Davis was a small government conservative
Much, much more!
In Everything You Were Taught About the Civil War is Wrong, Ask a Southerner!, award-winning author and historian Lochlainn Seabrook sets the record straight on these and hundreds of other commonly misrepresented topics in this easy-to-read, well documented reference book. Softcover, 266 pages, $20.