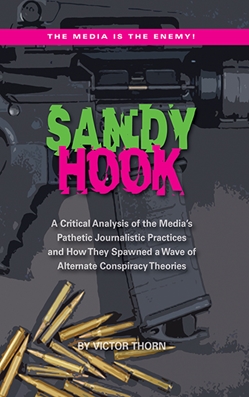 What happened in December 2012 at Sandy Hook Elementary School (SHES) in Newtown, Connecticut, where 20 elementary school children were massacred along with several adults, left the nation in a state of shock.

However, from the second the event happened, the mainstream media began a barrage of reporting, 95% of which was absolutely wrong. This pathetic—or purposefully confused—reporting left truth-seekers, already distrustful of any official story coming from the U.S. federal government or from the controlled press, crying foul. And why not?

As of the publication of this little booklet in late January 2013, not a single solid fact has emerged from any official source proving what really happened inside SHES.

Who is Adam Lanza? What guns were actually used to commit the crime? Who were those other suspects arrested? What about the ever-changing stories offered by eyewitnesses? What about the very specific but inevitably incorrect mainstream news reporting? Was it designed to rope “Sandy Hook truthers” into speculation? Is there even more to the story? Is there more to the agenda?

Travel along with investigator Victor Thorn, who examines the mainstream reporting on the event and asks the tough question from an angle few other researchers ever could.