NIXON’S SECRETS: The Rise, Fall, and Untold Truth about the President, Watergate, and the Pardon

View cart “Confessions of an Illuminati: The Time of Revelation and Tribulation Leading Up to 2020 (Volume II)” has been added to your cart. 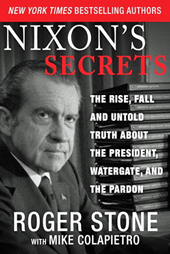 Roger Stone, the New York Times bestselling author of The Man Who Killed Kennedy: The Case Against LBJ, gives the inside scoop on Nixon’s rise and fall in Watergate in his new book Nixon’s Secrets. Stone charts Nixon’s rise from election to Congress in 1946 to the White House in 1968 after his razor-thin loss to John Kennedy in 1960, his disastrous campaign for governor of California in 1962 and the greatest comeback in American presidential history.

“Just as the assassination of JFK prevents a balanced analysis of Kennedy and his times, the myth of Watergate prevents a reappraisal of our 37th President,” said Stone, whose book on LBJ was the second biggest selling book during the 50th anniversary of Kennedy’s murder.

Stone looks at the Nixon presidency: the desegregation of the public schools, the progressive social programs, Nixon’s struggle to end the war in Vietnam, the historic SALT arms reduction agreement with Russia, the saving of Israel in the Yom Kippur War, the opening to China, and the disastrous decision to take America off the gold standard.

“The mainstream media’s interpretation of the facts surrounding the Watergate episode are a fantastic and grotesque distortion of historical truth,” said Stone. “Cursory examination of the facts in Watergate will reveal that the actions which caused the fall of Nixon cannot be reduced to the simplistic account summarized by Bob Woodward and Carl Bernstein of The Washington Post.”

The author outlines how White House Counsel John Dean planned, pushed, and covered up the Watergate break-in, then sought to avoid responsibility for it. Stone examines the bungled Watergate break-in to determine what exactly Nixon’s agents were looking for and how the CIA infiltrated the burglar team and sabotaged the break-in to gain leverage over Nixon. Find out why Nixon demanded the CIA turn over the records of the Bay of Pigs and Kennedy assassination.

Learn how a cabal of military and intelligence hard-liners spied on and undermined Nixon to stop his pro-peace détente foreign policy, his withdrawal of troops from Vietnam, his arms limitation agreement with the Soviets, and his opening to Red China. Discover how Vice President Spiro Agnew was set up to move him out of the line of presidential succession.

Stone makes the compelling case that General Alexander Haig orchestrated Nixon’s removal from office in a coup d’état and brokered the deal for his pardon. Finally, the public will learn what is on the 18-½ minute gap in the White House tapes.

Stone, a Washington insider for 40 years, outlines why FBI agent Mark Felt is not “Deep Throat,” why there is no Deep Throat, and why Bob Woodward and Carl Bernstein lie about it even today.

Stone reveals how Nixon used the dark secrets he knew to avoid prosecution by blackmailing Gerald Ford for a full, free, and unconditional pardon. Nixon’s secret would not only destroy his presidency; it would save him from prison and allow him to launch his final comeback—advising President Bill Clinton on foreign affairs despite Hillary’s attempts to block him and her being fired from the 1974 House Impeachment Committee for lying and violating Nixon’s rights.

“Roger Stone’s contribution to the genre Nixon’s Secrets: The Rise, Fall, and Untold Truth about the President, Watergate, and the Pardon is as fascinating as it is unique. Roger Stone has written a jewel of a political book. The memoir that Stone has written is a decidedly no-spin recounting of the Nixon he admired and knew so well along with the events of Nixon’s quite public and historic life.”—Jeffrey Lord, former Reagan White House Political Director for the East Orlando Post

“Roger Stone offers a compelling alternative history and backs it with research. He revives politics of the tumultuous 70’s. His Nixon is great and tragic.”—Judge Andrew Napolitano, FOX NEWS Legal Analyst

“Compelling reading from GOP Political Mastermind Roger Stone. Stone makes it clear that he hasn’t written a sanitized version of Nixon’s political life, ‘nor is it an attempt to rehabilitate his reputation. Don’t expect a whitewash of Nixon’s sins because ‘no man is a hero to his valet.’ On balance, he conclude that Nixon’s greatness and his vision for a global political realignment to achieve world peace must be viewed as well as his numerous mistakes.”—Nancy Smith, Executive Editor at Sunshine State News

“Stone, a hard-ball player exposes John Dean as a self-serving liar who planned, pushed and covered up the Watergate Break in for his own agenda. Stone builds on the work of Len Colodny, James Hougan, Douglas Caddy, James Rosen and Phil Stanford to prove Dean is the real weasel of Watergate.”—The Broward Bugle

“All in all, this book certainly merits a five star, excellent review for the wealth of new information it contains. It certainly clears up a lot of remaining questions as to ‘what really happened’ in the Watergate case, mostly caused by a lot of confusion and misdirection owed into the story by Messrs, Woodward, and Bernstein. Above all else, the book sets the record straight in relation to the prevarications of John Dean, as when he called Dean’s book (misnamed The Nixon Defense) ‘an all-out attack on President Nixon.’ It’s far more accurate to see the book as Dean’s defense, his last and best effort to paint a picture of how an innocent young lawyer suddenly and unexpectedly found himself in the midst of a cabal of evil-doers—and how he alone struggled to do the right thing…

“Do not be put off by the reviews that complain of poor editing; there are a few redundancies and a misspelling or grammar error here and there but to state that these discredit the book is such overkill that it seems more like the kind of whining that one resorts to when there is nothing more substantive to say. In some of these cases, in fact, it is necessary to repeat, or refer to, a past reference maybe 50 pages back, in order to make another point and that should not be considered a ‘redundancy’ as I think some have done.”—Phillip F. Nelson, Author of LBJ: The Mastermind of the JFK Assassination and LBJ: From Mastermind to “The Colossus”

“I knew Nixon in the late ’80s. I met him in George Steinbrenner’s box at Yankee Stadium. Roger Stone nails it. He really understands Nixon.”—Donald J. Trump , President of The Trump Organization

“Roger Stone tells the unvarnished truth about Tricky Dick, the Bay of Pigs, the JFK assassination, Watergate, and the secret deal with Gerald Ford for a pardon.”—Governor Jesse Ventura

“A must-read for the political junkie. Nitpickers complain about editing errors from an underground publisher, but the material is gold. Stone is candid about Nixon’s drinking, his long-term Chinese mistress, and his hard-ball tactics. The Kennedys emerge as villains who stole the 1960 election.”—South Florida Post

“If you want to know what happened at Watergate read this book.”—Eugenio Martinez, Watergate Burglar, Age 92

Roger Stone is the author of the New York Times bestseller The Man Who Killed Kennedy: The Case Against LBJ, The Making of the President 2016,  Jeb! and the Bush Crime Family, The Clintons’ War on Women, The Benghazi Report, and Tricky Dick. He is a legendary political operative who served as a senior campaign aide to Richard Nixon, Ronald Reagan, and Senator Bob Dole, and is a close friend and adviser to President Donald Trump. Stone would parlay being the youngest staff member of the Committee to Re-Elect the President into being a confidant and adviser to the ex-president. A veteran of eight national presidential campaigns, Stone writes for the Daily Caller and Fox Opinion online.

Mike Colapietro is an investigative journalist and researcher who received his bachelor’s from Eastern Connecticut State and is studying for his master’s from the University of South Florida. His work has appeared in the Tampa Bay Times, in Smoke Magazine, and on Yahoo.com.