Before Our Very Eyes: Fake Wars and Big Lies From 9/11 to Donald Trump

View cart “911 EVIL: Israel’s Central Role in the September 11, 2001 Terrorist Attacks” has been added to your cart. 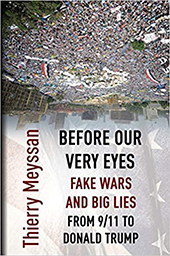 World-famous political analyst and editor Thierry Meyssan has lived the last 10 years in the thick of the action in Syria and Libya, even serving personally as an adviser to those governments. In Before Our Very Eyes, he shares the inside story of the 21st-century regime change wars. He lays bare the “Arab Spring,” the “revolutions” against Muammar Qaddafi and Bashar al Assad, and the rapid rise of the jihadist monster ISIS, as masked operations of the U.S. empire, “leading from behind.”

Before Our Very Eyes chronicles the onslaught against Syria and Libya from the viewpoints of three camps: the foolish ambitions of the French neocolonialists, the fanaticism of the Muslim Brotherhood, and the lust for world domination of the Anglo-Zionist-American Empire. The Anglo-American axis (the U.S., UK, and Israel, the last of which operates discreetly behind the scenes) deployed their stranglehold on the world’s money and media to purvey a fake narrative of human rights violations.

This was the cover story for the real scheme: to utterly disable the Muslim world by bringing it under the sword of fanatics like the Brotherhood, al Qaeda and ISIS. Vassal regimes like Turkey, Saudi Arabia, Qatar, Jordan, and the Emirates were assigned to do the heavy lifting. For public relations purposes, the U.S. pretended to fight half-heartedly against ISIS—which in fact it had intentionally created in Iraq, to divide and conquer the insurgency. The U.S. then covertly ferried the terrorists into Libya and Syria. It continues to prop up ISIS by devious means.

Thus the wars on Libya and Syria were based on treachery and fakery from start to finish—but the suffering of millions of innocent victims is all too real. A most murderous masquerade!

Thierry Meyssan shocked the world with the first “9/11 Truth” books, his L’Effroyable Imposture in March 2002 (9/11: The Big Lie), and a sequel, Pentagate. In the 1990s he was national secretary of a French radical party which held seats in the government. He is the founder of the Voltaire Network, a major alternative international press agency. In 2005, he organized the Axis for Peace, a congress of international leaders and writers opposing illegal wars.

In 2007, he was forced into exile and settled in the Middle East, where he has witnessed and participated in history in the making. He has been called France’s most controversial public figure, and is the only Western observer to remain on the scene in Libya and Syria during the entire conflict. In 2011 Meyssan went to Tripoli and was appointed by Gaddafi to mobilize international support against the aggression that would destroy the Libyan republic; but the NATO onslaught came too quickly, and he narrowly escaped with his life. He is currently consultant to Syrian President Bashar al-Assad’s government, and has been close to heads of state like Hugo Chavez of Venezuela and Mahmoud Ahmadinejad of Iran.